Music theater for everyone from 4 years old. Based on the book De Paraplu by Ingrid & Dieter Schubert, published by Lemniscaat.

Dog Quibus finds an umbrella: a very ordinary one, a red one. But then the wind comes: it lifts the umbrella and Quibus has to come! He is blown around the world and experiences fantastic adventures. He dances on the clouds, plunges into the ocean, hangs among the bats, but ultimately longs for his own bed again.

The lively music theater performance is based on the picture book De Paraplu by Ingrid and Dieter Schubert. In the meantime, the little black dog has become a classic hero for many. The makers of the Umbrella also let themselves be dragged by the red object. Let yourself be carried away by the sound-rich atmospheric music by Nicoline Soeter, the playful imaginative direction by Annechien Koerselman and the humorous texts by Floortje Schoevaarts and you will discover a world whose existence you did not suspect. 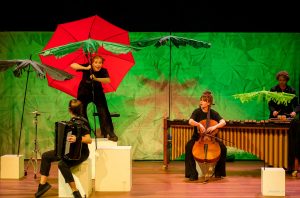